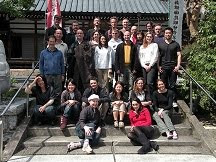 We held a 3-day zazen retreat recently at Tokei-in temple in Japan. We were a fairly big group, with people there from all parts of the world like North and South America, Europe, Asia, Africa, Australia and New Zealand. There was even a woman there from the same place as me in Ireland. We'd never met before, but it turned out she’d attended the same school as one of my (very few) old girlfriends. I don't know which of us was more surprised about that.


I figured that the retreat might get a little disorganized because we were a fairly big group. But everyone pitched in and it felt like things went really smoothly. We were helped a lot by the cook (Tenzo) at Tokei-in. He's a Japanese monk who I guess is in his seventies. He's been at the temple for many years, and was the cook there when Nishijima Roshi used to hold his retreats there too. He did all the cooking and preparation by himself, and he made a lot of great meals. I was sleeping in the room next to him at the temple, and I heard him get up around 3.30 am on the first morning to start the preparation work and at around 4 am the next morning. There was a total of 28 of us for three meals a day, so it meant a lot of hard work for him. But he was always smiling and was the most helpful person you could hope to meet. I sometimes read things where people criticize some aspects of Buddhism in Japan. Maybe they’ve got a point about some things they criticize, but there are also a lot of good things about Buddhism in Japan that people maybe overlook. The cook at Tokei-in is certainly an example of some of the good things. Not just because of his hard work and great meals. His attitude was great too. We gave him a big round of applause and thanks before leaving. 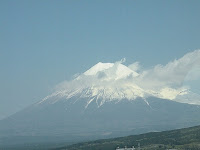 We held the retreat over the first three days of what’s called “Golden Week” in Japan. Golden Week is a period with four or five public holidays in a row. It tends to be very busy on the roads and trains for the first day or two of the week. So I was worried it might be hard to get tickets, or at least a seat, for the train from Tokyo to Shizuoka, which is where we were holding the retreat. But it turned out okay. We all managed to catch the train and I think everyone got a seat on the way down. I was about the last to get on the train. I figured all the seats would be gone, which they were, but one of the guys had been keeping a seat for someone, and I managed to hook up with him. We had a couple of nice seats by the window. It was a very clear day, and we got a great view of Mount Fuji on the way (that's a photo I took from the train).

We were a little behind the scheduled time when we reached the temple, but we soon got into the zendo (zazen hall) and started zazen. Some people there were trying it for the first time. I gave some instructions on how to sit and how to do the walking meditation known as “kinhin”, and then we all had a go at it. Everyone seemed to settle into the zazen well. One person who was trying it for the first time was a bit worried whether she’d be able to do it or not, but she settled right into it and by the end of the retreat she was one of the first into the zendo when it was time for zazen.


I gave four talks during the retreat. It was more like three talks really, because the fourth talk was a kind of feedback session where people gave there impressions about the retreat or asked questions or talked about some particular point. In the first talk, I spoke about what we’d be doing during the retreat and talked a bit about doing zazen. In the second talk I spoke about the life of Gautama Buddha. In the third talk I discussed about Buddhist ideas about right and wrong and some other topics. There were a lot of questions during the talks, so we ended up touching on a good few different points.


One question that came up during one of the talks was about the Buddhist idea about heaven and hell. It was an interesting question, and wasn’t really something I’d thought about before. In some Buddhist texts and sutras you’ll sometimes read about people “falling into hell” or the Buddha coming down from “Tusita heaven” and things like that. My own opinion is that these stories aren’t meant to be taken too literally. When I was growing up, we were taught that heaven and hell were places that actually existed. If you were good in this life your soul would go to heaven after you die, and if you were bad your soul would go to hell. God was in heaven and the devil was in hell. There was also a place called “purgatory” where your soul would go if it didn’t go straight to heaven. After it had been in purgatory for a while to make up for any sins you had, it could go to heaven. That’s the way I learned it anyway.


Buddhism has a different view of heaven and hell. For me at least, the Buddhist idea about heaven and hell is that this life that we all live now can be either heaven or hell. If you’re happy in this life, it can be heaven. If you’re unhappy, it can be hell. Buddhism doesn’t say that after you die you’ll go to heaven or you’ll go to hell. So if you live a happy life, then it’s like heaven. And if you live an unhappy life, then it’s like hell. That’s a bit simplistic, but I think that’s about as close as Buddhism gets to heaven and hell. Of course, we all have circumstances that we’re born into or grow up in that can determine to some extent whether we can live a happy life or not. But whatever circumstances we are in, it’s possible for us to make our lives happier or better. And Buddhism says that the way to live a happy life is to do good things, and don’t do bad things. The reason for this is that Buddhism believes in what’s called “the rule of cause and effect”. Basically what that says is that if you do “good” or “right” things, then that’ll produce good effects, and those good effects make your life happier. And if you avoid doing “bad” or “wrong” things, then you’ll stop producing bad or wrong effects that make your life unhappy. So no matter who you are or where you are, if you do your best to do “good” things and not do “bad” things, your life will become happier. For me, that’s what heaven and hell mean in Buddhism.


On the way back to the train station after the retreat, Kim told me a story about someone who had a dream in which they asked God to show them heaven and hell. God agreed and first of all brought the person to a dining room that had two tables, one on either side of the room. (Kim told me it was just like the dining room we ate our meals in during the retreat.) There was all sorts of delicious food stacked up on the two tables, and there was a lot of hungry people sitting next to the tables trying to eat the food. They could only eat the food by using chopsticks. But the problem was that the chopsticks were about two meters long. And because the chopsticks were so long it was impossible for anyone to pick up the food with the chopsticks and then put the food into their mouth. So everyone was very unhappy and frustrated and dissatisfied because they had all this great food in front of them, but were unable to eat it. God said “this is hell”. Next, God brought the person to another dining room that looked exactly like the first room. Just like in the first room, there were two tables on either side that were covered with all sorts of delicious food. People were sitting next to the tables, and had the same kind of long chopsticks as in the first room. But the people in this room were all happy and smiling and cheerful. When the person looked closely, she saw that the people in this room weren’t trying to use the chopsticks to pick up the food and put it into their own mouth. Instead they were using the chopsticks to pick up the food and put the food into the mouth of someone else on the other side of the room. It was easy to use the long chopsticks for that, and everyone could eat plenty that way. God told the person “this is heaven”.


Kim’s story about heaven and hell in some ways summed up what this retreat was about for me. I’ve attended a fair few retreats in the past, but of all the retreats I’ve been to, this was the nicest in many ways. So thanks to everyone who came and helped make the retreat work.