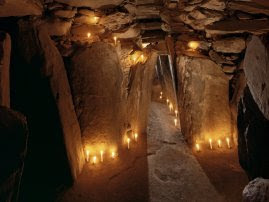 In Ireland, the place to be on winter solstice morning is an old Megalithic Passage Tomb called Newgrange. It was built about 5,000 years ago and reconstructed in the 1960's. There's a passage and a chamber in the tomb that are illuminated at sunrise by the winter solstice sunlight. The sunlight passes through an opening over the tomb entrance and lights up the chamber. It lasts for 17 minutes and only happens on 2 or 3 days each year. It only happens on a clear day, so some years the chamber and passage aren't lit up at all. This year the weather was good, which was just as well, as they had the first ever winter solstice webcast from inside the tomb. The passage and chamber are very narrow, so only a small number of people can fit inside. So they decided to do the webcast so lots of people could watch. The webcast didn't work on the first day though, as lot more people wanted to watch than expected, so the system just shut itself down. But it was up and running alright on the second day, Saturday.

I didn't manage to catch the live webcast, but I took a look at an archive of it on Saturday. The whole show lasts about an hour. It's got the history of the place and things like that at the beginning, but I was mainly interested in seeing the part where the sunlight comes through the passage, so I skipped on a bit. It was nice to see. Right at the end an Australian professor guy who was inside the chamber comes on and is asked what he felt was so cool about being inside the chamber to see the sunshine coming through. He said it was the fact that people in the 20th century can experience more or less the exact same thing that those ancient people did 5,000 odd years ago.

I thought his answer was spot on. It reminded me of Zen Buddhism in a funny way. In Buddhism we do a sitting meditation called zazen. Most Zen Buddhists practice zazen everyday. It's the same sitting practice that the first Buddha, Gautama, practiced in India 2,500 years ago - long after the tomb at Newgrange was built. And kind of like what the Aussie Professor said about being inside Newgrange for the solstice, the thing about zazen is that when you do it, you can experience the same thing that Gautama and the early Buddhists experienced all those years ago. Which is pretty cool I think. 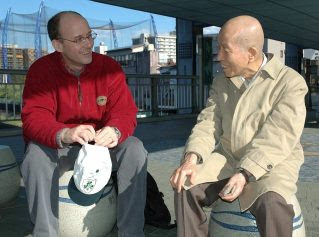 I moved back to Ireland a few months ago after 15 years in Japan. As you can imagine it was a big change. Lots of stuff to do - get the kids organized in schools and things like that. Those little things can take ages. Been here about 5 months now, and it's been real busy. But thankfully the weather's been good.

I got an email yesterday from Gudo Nishijima. I sent him some socks and a scarf as a present from Ireland. I hope they'll keep him warm during the winter over there. He wrote to say thanks. He's been studying Buddhism and doing zazen for over 60 years now. He still practices zazen everyday. He's a real Zen master. But he'll still drop you a note to say thanks for the socks.

Most of us have questions about death sometimes. In this video Gudo Nishijima answers questions about Buddhism's ideas on death at one of his talks at Dogen Sangha's old dojo in Japan.

Posted by Peter No comments: Links to this post

Buddhism isn't a spiritual religion. It doesn't say much about spiritual things like god or things like that. Instead it says the universe is god and that god is the universe. Buddhism also doesn't have a special holy book that everybody follows. Instead Buddhism has lots of sutras. All the sutras were written by ordinary human beings. Even Gotama Buddha, the founder of Buddhism, was a human being, though he was a very special one.

But even though Buddhism isn't a spiritual religion, it does have some things that seem a bit religious to most of us. When I first started to go to lectures on Buddhism in Tokyo, one thing I felt uncomfortable with for a while was reciting a verse in Japanese called Kai Kyo Ge (verse to open the sutras) at the beginning of each talk. I asked my teacher, Gudo Nishijima, if it was necessary for foreigners like me to recite the Kai Kyo Ge. He said it was just the tradition in Japan to do so, and of course nobody had to recite it if they didn't want to. For him, reciting Kai Kyo Ge was a way of expressing his respect and thanks to Gotama Buddha for teaching people about Buddhism.

I started to give talks on Buddhism when Gudo Nishijima retired from lecturing in English to devote more time to his translation work. I didn't bother reciting the verse to open the sutras at the first few talks I tried to give. Instead I just got right into trying to give a "talk". But somehow it didn't feel like a proper talk without having said the verse at the beginning. The atmosphere didn't quite feel right. So I started making sure to recite the verse at the beginning and the one at the end too just like Nishijima did. I realized Buddhist tradition can help sometimes.

Now I know anyone reading this probably couldn't care less about some Japanese verse about opening the sutras, but as this is my first real post I thought I'd just go crazy and put up a short video clip of Gudo Nishijima reciting the kai kyo ge at the start of one of his talks at Dogen Sangha's old dojo in Moto Yawata, Japan.

This is my first post on my new blog. I call it "the stupid way" because it's the way that I learn about Buddhism. I should probably call it "the hard way", but that title is probably already gone. I hope to post to this blog fairly regularly, so drop by once in a while.

Posted by Peter No comments: Links to this post