Gudo Nishijima Roshi's 89th Birthday Lecture - What I Want To Do 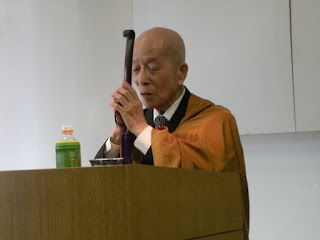 My teacher, Gudo Nishijima, gave a talk in English at Dogen Sangha's Saturday zazen meeting in Tokyo yesterday. He doesn't give talks in English there so often now, but he agreed to give one yesterday as it coincided with his 89th birthday.

The theme of his talk was "What I Want to Do." He covered quite a few topics during the talk. Some of the things he spoke about were how Buddhism is different to idealism and materialism, his ideas about Western civilization and Buddhism, and whether Buddhism is a religion or not. He also talked about how he used to doubt if there really was something called "the truth", and how he thinks people should study the truth if they want to be happy. He also answered questions on Zazen practice and other topics for about 15 minutes at the end.

I recorded the talk on my digital recorder. Click here to download the audio file (about 22 Mb).

Btw, at the start of the lecture we recited "The Verse to Open the Sutras" in Japanese. That lasts about a minute. After that, Gudo Nishijima starts his talk in English.

And here’s a link to Nishijima Roshi's blog.

"Remember, even if the countless buddhas in ten directions, as numerous as the sands of the Ganges, tried with all their power and all their Buddha-wisdom to calculate or comprehend the merit of one person's Zazen, they could not even get close."

Email ThisBlogThis!Share to TwitterShare to FacebookShare to Pinterest
Labels: one person's zazen

Man of the Moment

"Your victory has demonstrated that no person anywhere in the world should not dare to dream of wanting to change the world for a better place," - Nelson Mandela

A while ago I wrote about the Heart Sutra and something Buddhists refer to as“prajna” or "real wisdom". When I first heard Gudo Nishijima talking about prajna I found it hard to believe what he was saying. I’d never heard anyone talk about that kind of thing before, and I assumed something called “prajna” or "real wisdom" didn’t actually exist. But after a few years of going to Nishijima's talks I began to think that maybe what he was saying was true after all. His idea was that we develop some sort of intuition by practicing Zazen regularly, and that that intuition helps guide our actions and decisions so we don’t commit “wrong” actions or make “wrong” decisions. But Nishijima wasn’t talking about intuition as some kind of extraordinary ability we get from practicing Zazen. The way he described it, it was like a natural function we all have but most of us don’t work on or notice much.


Sometimes you can meet people in Buddhism who have strange ideas about extraordinary abilities they have. I spoke with a man recently who told me about a Buddhist teacher he studied with for 10 years. He described some things that happened at his former teacher's retreats. He said one time his teacher, a Buddhist nun, claimed some special power she had made a hurricane change course so it didn’t come to where they were doing their retreat. At another of her retreats, my friend said that he had been sick for the first few days of the retreat and had to stay in bed. He had some medicine in his bag, but didn't want to use it at the retreat. After a few days though, my friend started to take his medicine and began to feel better and walk around. When his teacher saw that, she declared to her students that her powers had helped cure my friend’s illness. When that happened, my friend finally decided to give up on his teacher because she was claiming things that weren't true. But he said some of her students believed the stories about hurricanes and miraculous cures.


I asked my friend why he joined in the first place. He said someone told him about that teacher's group, so he went along to one of her meetings. He said it was good at the beginning, but things started to change after a while. The teacher began to act differently and didn’t want people questioning her ideas or teachings. Later on money became more and more important to her. He told me that his ex-teacher still holds retreats now, but that it costs a lot to attend them. She also looks for donations of a few hundred dollars from anyone who attends.


Someone else I know told me that his first Zen teacher used to charge him 100 dollars an hour when he visited him to ask about Buddhism. My friend came to his senses after a while and stopped visiting that teacher and handing him the 100 bucks. But he was annoyed about what had happened, so he decided to check out the teacher’s background. His teacher had told him that he trained for several years with a well-known teacher at some temple in Asia, so my friend took the trouble to visit the temple to check out the teacher’s story. When my friend visited the temple he asked the monks if they knew his former teacher. But, you guessed it, no-one there had ever heard of the guy.


If you're interested in Buddhism, sometimes you can be unlucky enough to meet people who aren't what they claim to be or who are different from what they claim to be. In those situations, most people can figure out fairly fast that something isn’t right. But sometimes it can be hard to know. Those "teachers" usually know something about Buddhism, and if they know more than you know they'll use that to take advantage of you. Sometimes, there’ll be stuff on their website or whatever about how they studied with some famous teacher and practiced at some well-known temple in Asia or something like that. And if you meet them in person they’ll tell you the same thing. So it can be hard to know if they're lying, or exactly how much of what they’re saying is true. In my friend’s case, he was unhappy about being ripped off by his teacher so he went to some trouble to check out the teacher’s background. But most people probably wouldn't bother. They'll just accept what’s written on the website or what the teacher tells them as the truth. And even if you try to check out about a particular “teacher,” sometimes it can be hard to find out for sure.


Luckily, most Buddhist teachers aren't like that, and if you look around a bit you can usually come across a decent teacher. It’s harder though if you find a teacher that feels right for you, and then later on you start to see the teacher in a different light. Then you’ve got to decide is it worth sticking with the teacher or should you give up and try going elsewhere. And that might be hard if the teacher is giving you the impression that if you stick around just a bit longer he’ll help you solve the “great mystery”.


There are a lot of reasons people who know something about Buddhism become like that. The obvious one is they want to become rich and/or famous. It’s nothing new. Back in the 13th century, the Japanese Zen Master Dogen wrote about people “who only use Buddhism as a bridge to fame and gain”. So even back in Dogen's time people were using Buddhism to get rich or famous. Another reason is that some people like to have power or control over others. It's nothing new either. But of course those things go against what Buddhism is about. Buddhism is about seeing reality as it is and living the best life we can. It’s not meant to be a business or a way to become famous or control people. But there'll always be people who don't see it that way.


I met Gudo Nishijima after I'd been living in Japan for a few years. I didn’t really know anything about Buddhism, but I’d been doing some Zazen at home and had gone to a one-day Zen retreat at a temple in Kyoto. Back then, the Internet wasn’t really around, and it was hard to find information on Zen groups. But someone I met at that one-day retreat told me about a book called “Zen Guide” that had information about Zen groups in Japan. I bought the book and started to check the places it had listed for Tokyo. I went along to a Zazen sitting at one temple it listed, but there wasn't an awful lot happening there. I checked out some other groups it mentioned too, but they all seemed to have closed down or the person who was teaching had left. One group the Zen Guide did mention was what it called the “Nishijima Group”. It described Nishijima as a “businessman-priest.” When I read that part I decided not to visit Nishijima’s group, because I'd no interest in learning Buddhism from a "businessman-priest". But after I'd called all the other places, the Nishijima group was the only place left I hadn’t tried. So I called up Nishijima and he told me to come to his next Zazen meeting, which I did.


That was about 12 years ago, and I’ve been studying with him since then. One thing about Nishijima is that he’s never asked me for money or donations. As far as I could see he paid for his Buddhist activities out of his own pocket. When he held 3-day retreats for his English students, he used to pay a lot of his own money each time to help cover the cost. His idea was to work a regular job and pay for his Buddhist activity himself. His first job was in the Japanese government. Later on he worked in a securities firm, and after that he worked as an advisor for a cosmetics company. He kept working there until he was 85.


Like I said, when I first heard Nishijima talk about “prajna” I doubted what he was saying. But I did wonder why an elderly Japanese man like Nishijima (he was 76 when I met him) would bother saying something like that if it wasn’t true. That’s one reason I kept going to his talks. I couldn't see any reason why he'd want to lie. Of course Nishijima isn't the only Buddhist teacher who talks about prajna. The Heart Sutra is based on it, and a lot of other Buddhist teachers will tell you about prajna too. Master Dogen wrote about prajna as well. In Shobogenzo, there’s a chapter called “Kokyo”in which he talks about “the eternal mirror”. It's not an easy chapter to understand, but the introduction to it from the Nishijima/Cross translation gives an idea what it's about: