The Sun is Eclipsed by the Moon 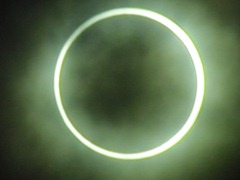 The first album I ever bought was a cassette tape of Pink Floyd’s “Dark Side of the Moon”. That was back in the days before CDs and MP3. My brother had borrowed the album from one of his mates, and he played it constantly on our old record player for a week or two. We had no headphones in our house, so we all ended up listening to whatever was been played. It took me a while to get into it, but after listening to it for a couple of weeks like that I was a fan. But then he had to give his buddy back the album. So we had no Pink Floyd anymore. I was only around 13 or so at the time, and never had much money, but I decided to save up the little bits of cash I got from my parents for a few weeks and invest in the Pink Floyd. So after saving up for a wee bit, I went into our local music shop and bought my first ever album. I kept it for a long time and played it over and over. Later on, I didn’t play it so much and got into other sounds, but every once in a while I’d take out the Dark Side album and it always sounded as good as ever.

On one of the tracks, they sing about “the sun is eclipsed by the moon”. I never really gave much thought to what they were referring to until the last few days. What got me thinking about it today was that we had a solar eclipse here on our own doorstep in Japan. It started at about 6 am and continued for a few hours. We bought some special glasses to use to look at the eclipse with. The ones we bought cost about 800 yen (7 or 8 euros), which I thought was going to be a waste of money, but they worked out well. They’re made with special material to filter out lots of different rays so you can see the eclipse clearly.

I figured we probably wouldn’t see much even with the glasses, but I was wrong. They made a big difference, and we could see the kind of silver circle around the moon just like you see in the photos. It was really, really cool, and way better than I imagined. Me and my son were awestruck for a couple of minutes when we looking at the perfect circle part.

You should be able to see the eclipse in some places on the west coast of the US today and later on this year in Australia and New Zealand. If you’re in one of those spots, I’d recommend getting a pair of those glasses if you can. They make a big difference. The Japanese government were warning people not to look at the eclipse with the naked eye, because it might cause eye damage or make you feel sick for a while. I’m not sure how true that is, but apart from that, you may not see very much without them. It might look something like this photo:

The next solar eclipse we’ll be able to see in this part of the world won’t be for another 390 years or so. I’m not sure if my blog will still be around then, but in case it is, I’d just like to say for anyone reading this in 2402 that it was pretty cool way back here in 2012 too.

I wasn’t going to mention anything about Buddhism in this post, but when I was looking at the silver ring around the moon it reminded me of something we were reading in our zazen class the other day. We were going through a text Dogen wrote about the Lotus Sutra. One of the things that comes up in that is about how the Buddha was supposed to have a circle of white hair on his forehead that light shone out from. Supposedly white light from the circle of hair could reach up to a kind of Buddhist heaven or something like that. To me, those kinds of descriptions are mainly legends and are a kind of a romantic and poetic way of describing the Buddha. So when I read that sort of stuff, I usually don’t take it literally. But that was one thing I was reminded of this morning when I was looking at the silver ring in the sky. And in other texts in Buddhism they say that the whole universe is the Buddha’s body. It’s based on the Buddhist idea that everything in the universe is connected and is all part of one big whole thing, and you and me and everyone else are part of it too. So in that sense, I can see how the cool silver ring of light this morning might not be too unlike the idea of light radiating from the Buddha’s head.

By the way, one of my favorite tracks on the Dark Side album is “the Great Gig in the Sky”, which is something I feel like I got to experience today.

And one last thing, I realized afterwards that I had just seen the dark side of the moon for the first time with my very own eyes (with the help of those glasses). Wish you were here to see it too!