A Question of Existence and Time 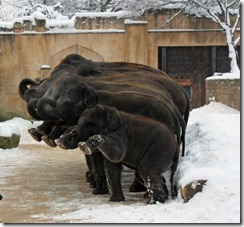 A while back, before he entered hospital, Gudo Nishijima sent me a copy of an email he wrote to someone who asked him about this.

It’s only a small point in some ways, but that’s the Buddhist idea about existence and time. That’s why you sometimes hear people talking about “being here and now”. “Here” is the existence side, and “now” is the time side. And even though people use that phrase to describe feeling really present in the moment and focused on what’s happening right now and nothing else, actually the phrase “being here and now” applies to everyone. To you and me and all the folks in the neighborhood. And it’s like that right throughout our lives. There’s no other way. The only place we can ever be is where we are at each moment. So in a way it’s not a big deal. It’s the same for everyone.

What happens to most of us, though, is that our thoughts distract us from where we are and what we’re doing. So instead of focusing on slicing the veggies, we’re thinking about what happened a couple of weeks back when we saw those dancing elephants in Iceland. Or maybe we think about how great things would be if we could manage to get a nice job in London… We all know how it goes. We’re doing something that we’re not too excited about and our mind is drifting off somewhere else.

This is something you’ll notice if you do meditation. You’ll be sitting there on the cushion, and your mind will be going all over the place. That’s what happens to me anyway. When I do meditation, very little is happening outwardly, I’m literally just sitting there. But my mind can get really active imagining all sorts of different scenarios about different things or dreaming about all kinds of experiences that are never going to happen. But if you sit there for a while, gradually your mind starts to settle down all by itself, and during the meditation you can notice that, hey, you’re just sitting on the cushion doing your meditation. That’s basically “being here and now”. It’s not a big deal, and in a way it’s very simple, but it’s kind of a nice thing to notice too.

And when you get up off the cushion, that “being here and now” might stay with you for a while, and you might notice that being here and now isn’t so bad after all. The only thing about it is that even though people can write and talk about it, “being here and now” isn’t really something we can leave to our imagination. It’s something we have to experience for ourselves. That might sound difficult, because sometimes when we hear words like “being here and now”, it sounds like it must be something really intense that’s very faraway from where we are at the particular time. But actually it’s not like that. You’re already experiencing it. It’s just a matter of noticing, or maybe not noticing, it.

When I used to talk to Gudo Nishijima about this kind of thing, he used to say something like “we are enjoying the present moment”. It sounds really simple, and in many ways it is, but a lot of times we get dragged away by our thoughts of somewhere else or some other time and miss out on the things that are happening right in front of us. Doing meditation helps us to notice that.

So if you’re looking for a way to enjoy the present moment a bit more, you know what to do. And figuring out where and when to do it is easy too, right?

I Know a Way to Eliminate Suffering from Life 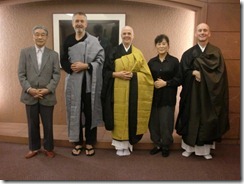 My friends Ingrid and Jiku-san came to Tokyo recently from Chile for a short visit. Ingrid is a student of Gudo Nishijima Roshi and Jiku-san is a student of a Japanese monk named Daisetsu Tangen Roshi. They both became interested in Zen Buddhism after they had been practicing yoga for a while.

Ingrid’s first experience with meditation was at a yoga class in Chile. After doing meditation there, she decided to try it at home, and continued to practice at home for 10 years. Later she began to practice with a small Buddhist group in Santiago. She came to Japan a few years later and met Nishijima Roshi in Tokyo. Afterwards, she started a Buddhist meditation group in Chile, and helped to organize Nishijima roshi’s visit for talks and retreats in Chile in 2004.

Jiku-san’s first name is Patricio, but people usually call him by his Buddhist name “Jiku-san”. He first encountered zazen when he was doing a yoga instructor’s course in Nepal. A few years later his job as a photographer brought him to Japan to do a feature on a Zen retreat at a temple named Bukkokuji. Bukkokuji is in a town called “Obama-shi” in Fukui prefecture. Daisetsu Tangen Roshi is the abbot there. When Jiku-san came to the temple, he liked the life there so much that he decided to stay. He eventually spent 10 years at Bukkokuji, before deciding to return to Chile to teach people about zazen and Buddhism. When he returned to Chile, he and Ingrid opened a Zazen dojo together and began to hold retreats and classes. Jiku-san also taught zazen at a prison there for 7 years. Recently, Ingrid and Jiku-san opened a new dojo called “El Zendo” in Chile. El Zendo is in a small town named Tunquen on the Pacific coast, about two hours from Santiago.

I asked Jiku-san and Ingrid to give a talk to our Saturday Zazen class while they were in Tokyo. They kindly agreed. Jiku-san told us about how he first became interested in Buddhism, and about life at Bukkokuji temple, including the daily schedule and going on begging rounds (called “takuhatsu”), and how the 10 years there changed his own life. He also told us about his experiences teaching Buddhism in Chile and at the Chilean prison, and about El Zendo. Ingrid told us about her experiences practicing at home on a daily basis for 10 years while raising her family, and how she ended up meeting Nishijima Roshi when she came to Tokyo, and later on began to practice together with Jiku-san in Chile.

I recorded the talk on my MP3 recorder. It lasts about 50 minutes. There’s also plenty of questions and answers during the talk. (The title of this post is something that comes up during the talk.) You can click here to download the MP3 file (47 MB).

By the way, one of the things that Jiku-san mentions during the talk is that people at the temple used to scrub themselves everyday with a “tawashi”. A tawashi is a small scrubbing brush that the Japanese usually use to scrub vegetables or pots and pans, but at the temple they found it was a good way to keep themselves clean too.

You can check out the El Zendo website at www.elzendo.cl. Jiku-san and Ingrid hold retreats there on a regular basis that everyone is welcome to attend. They told me sometimes people visit them from other countries in South America and from North America too.

Incidentally, the photo at the top of this post was taken the day we held the talk. Ingrid is in the center, and Jiku-san is on her right. The person on Jiku-san’s right is Harumi Saito. Harumi Saito began to practice zazen in the 1970’s with Nishijima Roshi at his Saturday classes in Tokyo, and has helped to organize the Tokyo classes for many years. He also taught zazen in a city near Tokyo for several years. He still comes to the Saturday zazen practice on a regular basis. On Ingrid’s left in the photo is Kimika, also one of Nishijima Roshi’s students. Kimika was one of the people who accompanied Nishijima Roshi on his visit to Chile in 2004. I’m the bald guy on Kimika’s left. (Thanks to Shinji for the photo.)