If you’ll be in Japan during golden week and wouldn’t mind spending a few days at a Zen temple in the countryside, you might be interested in a retreat we’ll be holding at Tokei-in temple in Shizuoka from April 30 to May 2. The retreat is suitable for beginners, and anyone interested is welcome along. There’s some more information about the retreat here. 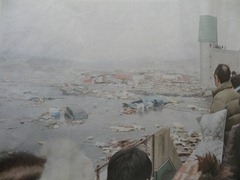 As everyone knows, we had a terrible earthquake and tsunami in Japan last month. Tens of thousands of people were killed, and hundreds of thousands were left without their homes and jobs and belongings. About 150,000 people are still living in temporary shelters at schools and other public buildings. Several towns and villages were completely destroyed. To make things even worse, the Fukushima nuclear power plant was severely damaged, and it’s been leaking radiation into the atmosphere for more than a month now. There have been lots of strong aftershocks since then too, and people are worried that there may be another big earthquake before long. So it’s been a horrible time for people in Japan. But despite it all many people are doing what they can to help each other, and are trying not to lose hope for the future.

I live in a place called Ibaraki Prefecture. It was one of the areas affected by the earthquake, although the damage here wasn’t as bad as in the worst affected areas further north. I’ve lived in Ibaraki for almost 20 years. We’ve had some strong earthquakes before now, but the earthquake in March was on a different scale to anything anyone here experienced before. Usually when an earthquake occurs, there’s a big kind of “thud” right at the start and then things start shaking and the vibrations gradually become stronger, and finally ease off after a minute or so. But when the earthquake struck on March 11 it was such a strong “thud” that it was clear from the start that it was a huge one. I was at home that day, and was doing some zazen on a cushion beside my desk when it struck. When the earthquake started, it was so strong that right away I jumped off the cushion and went under the desk. The walls in my room started shaking and all the things we had on shelves or in cupboards began to fall onto the floor. The shaking kept getting stronger and stronger, and everything was moving or falling down. The walls were moving back and forth and I thought the whole place was going to collapse.

After one or two minutes the shaking eventually started to ease off. I got out from under the desk to see if our place was okay. Some things had broken, but luckily there was no really serious damage. Our TV had fallen over, but it was still working. I turned it on to check the news. All the channels had emergency news about what was going on. The earthquake had destroyed buildings all over the north east of Japan, and the news was warning people about a large tsunami. The announcers were telling people to move away from the coast as quickly as they could. The channel I was watching was showing live pictures of the ocean that were being taken from a helicopter. It showed the tsunami approaching the coast and then moving inland through one town. A lot of people were trying to escape from the tsunami in their cars and on foot, but the tsunami was too big and moving too fast. There was nothing anyone could do to stop it. People were being swept away without any chance of escaping. It was very shocking to see what was happening. The tsunami moved inland for several kilometers and destroyed everything in its path. Then it went back to the ocean again. Almost nothing was left standing after it had gone.

Over the next few days, we started to get more information about what had happened. Reports about the number of dead and missing kept increasing. Soon we heard that almost 10,000 people were missing in one town alone. Thousands of people had been buried under the debris left by the earthquake, and thousands more had been swept away by the tsunami. The rescue teams are still searching for missing people now, but many of them may never be found.

We also started to hear about a major problem at a nuclear power station in Fukushima. Fukushima is about 160 kilometers from where we live. The power station had been hit by the tsunami, and the reactors were damaged and radiation was escaping into the air and sea. The people living in towns nearby had to leave their homes and move to temporary shelters further away. Some of those people had lost family members and friends in the earthquake and tsunami, but were unable to return to their towns to search for them because of the radiation. The people who had to leave those towns may not be able to move back again until the radiation levels drop. No one knows how long that’s going to take, but it might be five or ten years or more.

There were a lot of problems in our own area for the first week or so after the earthquake. The water and gas supplies were cut off, and there was a shortage of gasoline because the gas stations had run out. Most of the shops were closed because they were damaged by the earthquake and it was unsafe to let people inside. The shops that were open soon ran out of food and water. It was difficult to buy any food for a few days, and there were huge queues even if you could find a shop that was open. The trains had stopped running too because of damage to the rails. There was an awful lot of concern about the radiation from the nuclear accident too. Nobody knew exactly what was going on, and whether it was safe to go outside or not. Some of our neighbors left the area because they were worried about how the radiation was affecting us.

But even though there was a certain amount of panic, most people were trying to stay calm and do what they could to get through it. People were sharing things and trying to help each other. After a week or so, things began to come back to normal in our area at least. The water and gas were gradually restored, and shops began to open again. The schools reopened as well after a few days. After another week or so the trains started running again and the gas stations opened too.

In some ways life is returning to normal in Japan now. But there’s an awful lot of recovery work to be done, and the Fukushima nuclear disaster is going to be with us for a long time. There is still a very deep sadness about what has happened, but it seems like the people who were directly affected by the disaster are taking each day as it comes, and trying to do what they can each day. The community spirit is very strong in Japan now too, and a lot of people are working together to help each other recover. Even the people in our neighborhood seem to be a lot closer and friendlier than before. I don’t know how long that’s going to last, but it seems like the disaster has changed the way a lot of people think about what’s important.

I like to think that Japan will recover from what’s happened, although it’s going to take a long time. Probably some things will return to something like the way they were before the disaster, but some things in Japan will never be the same.