I Knew You Were Going To Ask That 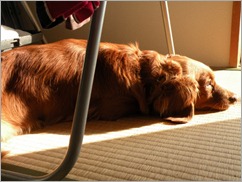 Here’s a question someone asked me a while ago:

Do you have a sixth sense?  How do you experience it?

Everybody has a sixth sense, except they don't notice most of the time. In Japan there's an expression "i-shin-den-shin" which means something like "heart-to-heart communication". Without saying anything you can sometimes pick up a vibe from someone else. Or it’s almost like we can communicate with someone even though they’re not anywhere near us. It's like if you stop off at the bakery on the way home from work and see a nice apple strudel and decide to buy it. But when you get home the person you live with has bought the exact same thing!

I watched a TV show recently about research someone did to see if a dog could tell when their owner was on the way home. It wasn’t to check if the dog had figured out the time the owner came home at each day. It was to see if the dog could tell if its owner was on the way home at a random time during a particular day. The dog lived in a house in a country town, and its owner spent most weekdays in a nearby city. The researcher arranged for the owner to come home from the city suddenly one afternoon, and recorded the dog’s behavior from around the time the owner started to make her way home. Sure enough, the dog started to become more alert right around the time the owner began to leave the city. By the time the owner got within a few miles of the house the dog was waiting right next to the door. It was strange to see, but the owner or the dog didn’t seem to care too much. They were just happy to see each other.

I’ve a feeling that if we worked on this we probably wouldn't need mobile phones anymore.

Or maybe it's just a coincidence...