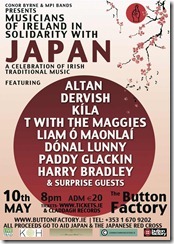 Here’s some information about a special fundraising concert being held in Dublin next week to aid the Japan disaster victims. Many of Ireland’s very best traditional musicians are taking part, and it sounds like it’s going to be a great night. It’s being held next Tuesday, May 10, at The Button Factory in Temple Bar. All proceeds go to aid Japan and the Japanese Red Cross.

On Tuesday, 10th May, a host of traditional music legends will show their solidarity with the people of Japan by holding a special fundraising concert in The Button Factory, Dublin. T with the Maggies, Altan, Dervish, Liam Ó Maonlaí and Dónal Lunny will whip out the jigs, reels and beautiful ballads on the night in a celebration of traditional music.

The concert will be streamed live online so that people in Japan can see that Ireland is in solidarity with them. All the groups and musicians have a huge following in Japan where some fans are so dedicated to Irish traditional culture and music that they even learn to speak Gaeilge.

"All of us in the trad world wanted to do something after the years of support the Japanese have given to both Altan and the other bands. This is our small way of showing that they are in our thoughts. We guarantee a great night on May 10th and you can be sure that a few surprise guests will show up also!" said Mairéad Ní Mhaonaigh, Altan & T with the Maggies, who is co-organizing the concert.

"The concert is being co-organized with Chika Usami who is from Iwaki City, Fukushima, Japan but lives in Ireland. Chika said, “If I had been in Iwaki during the earthquake I would have been affected, my friends and family are still under threat from the nuclear power plant which is only 40km away, and I thought there must have been a reason for me to have been in Ireland. I wanted to do something to help Japan and tried to think what connected Ireland and Iwaki and I thought of Altan. They had performed in Iwaki in 2009 and I had met Altan after the concert and they invited me to come to Ireland sometime. Part of the reason I came to Ireland was because of how much I enjoy traditional Irish music and culture.”