I grew up near a town called Galway in the west of Ireland. Galway is well-known for its tourist attractions, and has some nice beaches and plenty of sightseeing spots nearby. One of the nicer parts of Galway is a place named Salthill which is popular for its beaches and nightlife. I spent a lot of time around Salthill when I was growing up, and had a girlfriend out that way for a few years. We were too young to go into bars or nightclubs, so we spent a lot time hanging around with not much to do.


One person I met while I was hanging around Salthill was a guy named Tom. He didn't live with his parents. Instead he stayed at an "industrial school" in Salthill. Industrial schools were mostly run by priests, and were set up to care for orphans or children who couldn't live with their mother or father for some reason. The idea was that the children could live under the care of priests at the schools, and also learn a trade or skill of some sort that could help them find a job when they were old enough to leave.


The industrial school Tom stayed at was run by priests from an order named the Christian Brothers. When I first heard it was run by priests I thought that it must be an okay place. But Tom used to tell us stories about some things that went on there. He made it sound like an awful place. The Christian Brothers were well known in Ireland for being strict disciplinarians, but the stories Tom told about the behavior of some priests seemed to go far beyond just strict discipline. When I heard some of his stories I used to think that he was making them up, and that a priest would never do some of the things he mentioned. But later on I found out that Tom was telling the truth about what was going on in the school, and that people who thought like I did were completely wrong.


Very slowly, though, the truth about what was going on in the industrial schools and similar institutions throughout Ireland started to come out. A lot of stories about child abuse in those places began to surface. It become clear that thousands of children had suffered abuse. The Irish government set up a commission to investigate what had happened. The commission took 10 years to report on their investigation. They finally published their report yesterday. You can read more about the report here. Here's the summary of what they found out. Their findings showed that the extent of child abuse was much worse than anyone had ever imagined.


Since the report was published, there's been a surge in calls to a helpline set up for victims of abuse at those institutions. It's clear that a lot more people were abused, but didn't or couldn't report it until now. It's also likely that such kind of child abuse has been going on for many, many years. We're only finding out about some of it now.
Posted by Peter 8 comments: 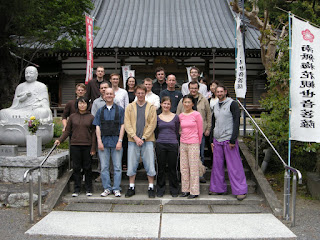 We held a 3-day zazen retreat last week at Tokei-in temple in Shizuoka, Japan. I was leading a retreat for the first time, so I was a bit nervous about how it was going to turn out. Thankfully, things worked out better than I expected. 18 people came, and there was a nice mix of different nationalities.


A lot of people who came were doing a zazen retreat for the first time. One or two people were even trying zazen for the first time. I thought that some of the zazen periods might be a bit hard for some people, but everyone seemed to get through them okay. There was a nice atmosphere at the retreat too. It may have been because a lot of people were doing a retreat for the first time and concentrating on the basics, including me in some ways. One person who was trying zazen for the first time told me she decided to come to the retreat when she heard about it from her friend. She didn't really know anything about zazen or Buddhism, but wanted to check it out anyway. At the end of the retreat she told me she figured having no particular ideas or expectations about what the retreat was going to be like was probably the best way for her. She said she could just accept it all as it was.


I learned a lot by "leading" the retreat. I'd seen Gudo Nishijima hold retreats there before and give talks and so on, but I never really knew how much it involved from his side. He used to put a lot of effort into his talks and into answering people's questions and the other things he did there. Going back on the train to Tokyo with him after some of his retreats I used to notice how exhausted he was. I can understand where he was coming from a bit better now. It was nice to lead the retreat and I enjoyed giving the talks, but I realized it requires plenty of energy too.


On the last day we had a general discussion about the retreat in which everyone gave their impressions or some feedback about the retreat. Most people seemed happy enough with the way it went. One or two people mentioned it might be good to incorporate some stretching exercises into the retreat. That's a fair point, and is something for me to work on for next time. I also got a few emails with some feedback after the retreat. Here's part of an email from someone who was doing a zazen retreat for the first time :

-----
...The discussion on the last day about full and half lotus also reminded me of my tendency to sometimes think "if only..." in regard to my sitting. When I first started sitting at home I used to sit on a pile of sweatshirts. If I was having problems settling I would sometimes think things would be different if only I had a zafu. So I made a zafu. And to be honest, it's a bit more convenient but that's about it. So I started thinking about the fantastic balance I would have if only I could sit full lotus... and so it goes on :-)

So it was good to be reminded that I shouldn't get frustrated chasing some imagined perfect state that only exists in my imagination. Just sit without expectation and accept that my legs are a bit wonky sometimes.
-----

Thanks again to everyone who came to the retreat, and to the people who inquired but didn't make it this time. Hope we can do it again next year.