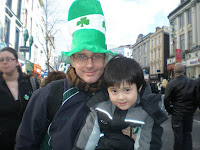 My memory of Saint Patrick's Day in Galway was doing the guard of honor for the parade in the rain with the FCA. It wasn't much fun standing around all morning getting wet, but we got to see the majorettes up close and later on we were given a free lunch in Lydon's restaurant, which was a big deal for most of us.

A few years later I was living in New York and went to see the massive parade on fifth avenue over there. I ended up staying out most of the night speaking in my Irish accent (from the bits I remember). Paddy's Day in Galway was never the same again.

Hope you enjoyed it!