Tale of the Two-eyed Monkey 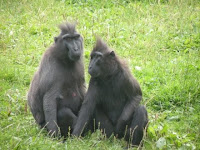 I don't get as much time as I'd like to read books. Like a lot of people, I've plenty of books that I bought ages ago but haven't managed to read yet. Recently though, my older son and I have started reading books together for about 20 or 30 minutes before he goes to bed. He's still in elementary school, and until recently I used to read him children's books at bedtime. But nowadays he prefers to get his own books at the library and read them himself. So we sit beside each other in the evening reading our own books.

A few nights ago, my son asked me about a book I was reading at the time, called “Everyday Zen”. He asked if it was about Buddhism. I told him it was. Then he asked what Buddhism is about. Now, my son knows I teach some kind of zazen class, and he sees me doing zazen at home, and he even does some zazen himself once in a while, but this was the first time he ever asked about Buddhism as such. I was a bit surprised. I wasn't too sure what to tell him, but I figured he might like the story about the two-eyed monkey. It's a fairly well-known story in Zen Buddhism at least. Here it is :

I wasn't so sure if my son would enjoy the story, but he seemed to think it was alright. After that, I also told him that what's important in Buddhism is not so much what we say, but what we actually do. I gave him the example of someone saying they're going to do their homework tomorrow, but when tomorrow comes they forget all about their homework and just watch TV instead. That made sense to him too, although I'm not sure he liked the example.

When he's older, if he asks me what Buddhism is about again, I'll probably tell him that in some ways Buddhism isn't really about “Buddhism” at all. It's just about being himself. So he doesn't have to worry about being a Buddhist, or a Christian, or a Hindu or things like that. He can just be himself all the time, and that's all he needs to do.

Of course, it's not always easy to be ourselves. Because we think maybe there's something wrong with us, or other people won't like us or we won't fit in and things like that. But one thing we can learn from Buddhism is that just to be ourselves is the best way. That's why we're here.