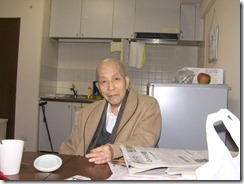 I met my Buddhist teacher, Gudo Nishijima, at his apartment in Tokyo yesterday. He’s 90 years old, but is still active for his age. He gives a Buddhist talk in Japanese every month in Tokyo, and travels to Osaka a few times a year to give a talk there. He’s also working on a new book in Japanese and he gets a lot of email from people interested in Buddhism. He told me he’s happy to be busy like that.
Physically, of course, he’s not as mobile as he used to be. This year the Tokyo summer was the hottest for over 100 years. The temperature got up around 35 Celsius everyday for about 6 weeks. Nishijima told me he tried to get out for a walk or to do his shopping each day during the summer. Unfortunately, he fell over one day on his way home with the shopping. When that happened he realized he’d have to be more careful. He said he realized he “was being too brave.” Nowadays he takes more care when he’s out and about. When I met him recently he told me he’s “training to be an old man”. He still feels young inside, but his body won’t always let him do the things he’d like to.
He was in good spirits yesterday, and always is as far as I can see. It’s a real pleasure to meet him. He’s always willing to discuss Buddhism, and I learn something every time we meet. It's great to meet someone who's cheerful and upbeat all the time. That's another thing I learn when I meet him. I get to see how someone is after studying Buddhism for more than 70 years!
I recorded some of our chat yesterday. It was a discussion about what Buddhism sees as the difference between matter and reality, or what Buddhism calls the "dharma". We also talked a bit about the reason to do zazen and about what Buddhists refer to as the "balanced state". Nishijima’s idea is that when we do zazen our body and mind become more balanced, and that balanced state is the natural state of humans. So when we do zazen we notice what it means to be human. Our talk went something like that anyway. Here's the mp3 file. It lasts about 12 minutes (11 mb).