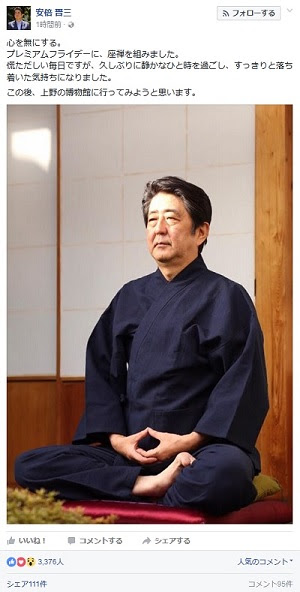 The Japanese Government have just started a campaign called “Premium Friday” to encourage businesses to let workers finish up at 3 pm on the last Friday of every month. The idea behind the campaign is to stimulate the economy by giving people more time to get out and spend money at the end of each month – which is right around payday - and to also cut down on excessive working hours (and stress levels) among workers.


Last Friday was the very first “Premium Friday” and the Japanese Prime Minister Shinzō Abe took to his Facebook page to describe how he was spending the afternoon. Here’s what he wrote in Japanese:

“Meditating (emptying my mind). I’ve been doing some zazen on Premium Friday. I’m busy everyday, but for the first time in a while I had some quiet time and feel refreshed and calm.
I think I’ll visit a museum in Ueno after this.”

I don’t know if the museum in Ueno that Abe went to after the meditation was the National Museum, but if it was he might have come across the big picture they have in there of a priest in the Obaku School of Zen Buddhism, which was painted about 100 years ago by a Japanese artist named Takamura Shinpu. I was down there recently and (with permission) snapped a photo of it on my phone. Here it is: