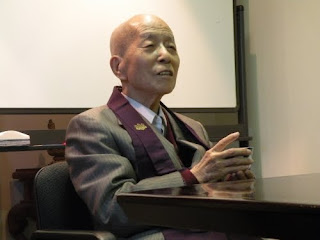 We arranged to meet at his apartment around noon yesterday, and to take a taxi together to the meeting place. While we were in the taxi, he said he felt very happy to be celebrating his 90th birthday. He said so many things had happened in his life, but now that he had reached 90 he felt really happy.

We reached the Young Buddhists Association with time to spare. Nishijima had time for some tea and rice crackers before his talk. There was a good number of people there, with the room more or less full. During his talk, Nishijima spoke about his family and upbringing and what caused him to become interested in Buddhism. Then we had time for questions. The talk was scheduled to last an hour, but there were plenty of questions, so we ended up running well past the hour.

I made a video recording of Nishijima's talk. In the following clip, he talks about his first teacher, Master Kodo Sawaki.

After the talk we presented Nishijima with some gifts and cards from his students in Tokyo and overseas. He seemed very happy to receive them and thanked everybody.

Later on we held a small birthday party at an Indian restaurant. Now that I think of it, we forgot to arrange a birthday cake. But I don't think Nishijima cared. He seemed very happy.